Are Tissue-Cultured Houseplants of Poor Quality? Plant tissue culture is something that I became interested in several months ago when an increasing number of conversations popped up in the houseplant community surrounding the Rhaphidophora tetrasperma. This plant has become extremely popular in the last year with prices skyrocketing to match its popularity.

Mid-way through the year, tissue-cultured specimens were introduced to the market at a much lower cost, making what was a very expensive plant readily available. I, too, saw these plants at my local greenhouse and picked one up for $25.

However, some people quickly noticed that there were differences between the tissue-cultured plants and the plants created through other methods of propagation. This sparked conversations about the quality of tissue-cultured Rhaphidophora tetraspermas including whether these plants were actually a different species altogether.

This post will dig further into what tissue culture is, why it is used, the quality of these plants, and more!

What is tissue culture?

Tissue culture is a method of producing new plants by taking a small portion of a mother plant’s cells and growing them out in a controlled environment.

The piece of a plant collected for tissue culture is referred to as an explant.

Explants are placed in a specific medium (often a gel, like agar) to induce growth. Then the medium is altered to encourage the explant to produce more shoots or plantlets. Finally, hormones are introduced to spur root growth so the plant can be transferred out of tissue culture.

Tissue culture is the first step of micropropagation.

Micropropagation is a method of producing a large number of plant clones in an efficient way.

When plantlets have grown roots in tissue culture, they are moved to soil (or sometimes vermiculite) to continue being propagated in a greenhouse for eventual sale.

The three main benefits of micropropagation are:

Why do people use tissue culture?

Tissue culture (TC) is used for a number of reasons:

Tissue culture has been around for a very long time (which was a surprise to me)!

The method of micropropagation, which uses plant tissue culture, has been around since the 1950s.

Micropropagation was first utilized to produce orchids, which are challenging to produce through sexual reproduction.

Are plants propagated through tissue culture good or bad?

The answer to this question is largely subjective.

Tissue culture is successfully used to create plant stock for the agricultural, floral, and houseplant industry.

The motivation and outcome of tissue culture is, by and large, to create better, healthier specimens. And often that is exactly what happens.

However, there are instances where the controlled environment used to propagate plants via tissue culture allows an unhealthy or undesirable plant that would have died outdoors to survive.

In these circumstances, the weakened or undesirable plant may propagate and perhaps even proliferate, which is what some people argue has happened with the Rhaphidophora tetrasperma.

What is the current status of conversations surrounding the Rhaphidophora tetraspermas that have been tissue-cultured?

There have been 3 main discussions pertaining to tissue-cultured Rhaphidophora tetrasperma, all resulting primarily from the visual differences in the leaves of the tissue-cultured plant.

What differences did people notice?

The tissue-cultured Rhaphidophora tetrasperma had narrower, thinner leaves and sometimes had thicker stems with a smaller internodal distance (or distance between nodes).

This led people to wonder if the plant was actually a (1) different species, (2) a weak, less resilient version, or (3) just a plant that needed time to grow into its more well-known form.

Photos of all referenced plants in this section are at the end so you can examine and compare them for yourself.

Here’s an update on where each of these hypotheses currently is (as far as I can tell) amongst knowledgeable hobbyists.

1. Tissue-cultured R. tetraspermas might be something else entirely, like Rhaphidophora pertusa or a mature form of Epipremnum pinnatum ‘Cebu Blue’.

Rhaphidophora pertusa: This species was seriously considered as the proper ID for the tissue-cultured R. tetrasperma due to its similar leaf shape and fenestrations (natural holes in leaves).

However, aroid experts consulted with the detailed definition of this species and determined that the tissue-cultured R. tetrasperma did not meet those specifications.

Similarly to R. pertusa, hobbyists agreed that some of the characteristics used to identify Cebu Blue pothos were missing in the tissue-cultured R. tetrasperma.

Current status: These theories have been disproven. Tissue-cultured Rhaphidophora tetraspermas are R. tetraspermas, not another plant.

Some plant enthusiasts and hobbyists view R. tetraspermas grown via tissue culture as unhealthy and undesirable.

Tissue culture works by choosing a healthy, quality mother plant to clone, but the plantlets propagated from the mother plant are rarely grown in the exact same conditions as the mother plant. These environmental changes can alter the way a plant develops.

Additionally, companies can also use growth hormones to speed up the production of highly desirable plants, which can also change the growth habit and appearance of a plant until this hormone has worn off.

Lastly, there are instances in tissue culture where imperfections and irregularities can continue to thrive that wouldn’t have been able to survive in nature.

As a result, it is possible that tissue culture may produce less-than-perfect plants. However, it isn’t highly likely. Whether tissue-cultured R. tetrasperma is an example of a poorly propagated plant isn’t agreed upon within the community, largely due to the next hypothesis I think.

Meanwhile, another group finds both the tissue-cultured specimens (as they are) and the “regular” specimens worth growing and collecting regardless.

Current status: The community is divided here as well. Hobbyists either feel like the tissue-cultured specimens will never grow into the desirable version of R. tetrasperma or that these tissue-cultured plants just need time to mature.

My personal opinion and experience with TC R. tetrasperma

I personally think it’s great that R. tetraspermas, tissue-cultured or not, are being offered at a lower cost. I find both plants attractive and own a tissue-cultured plant that I am interested to grow and observe over time.

I have a small non-tissue-cultured plant on order so I can assess for myself the differences between the two as I’ve never seen a non-tissue culture R. tetrasperma in person. I will update this post once that plant has arrived!

My personal assessment is that the leaf thickness and texture of both is about the same.

Since the non-tissue-cultured plant is so small, it is possible that it will develop a more resilient leaf as it matures.

Tissue culture R.tetrasperma on the right; non-tissue-culture on the left

Update as of 7/27/2020 – Tissue culture R. tetrasperma, is it still growing abnormal leaves?

I’ve had my tissue-cultured R. tetrasperma for a year now. The plant is a very fast grower and was close to reaching my ceiling, even with lower light in a North-facing window.

It hasn’t begun to grow leaves that look like the non-tissue-cultured R. tetrasperma. I’m starting to think it never will, but perhaps the next update will tell a different story!

Here’s one of the TC R. tetrasperma’s oldest leaves.

You can tell it is old and tired, and that it has the characteristic elongated shape.

Here’s one of the TC R. tetrasperma’s newer leaves.

Note how much wider, rounder, and thicker the leaf is.

Here’s a picture of the whole plant so you can see the older, bottom leaves with the signature tissue cultured shape as well as the newer, more classic leaf shape.

This plant is (still) an incredibly fast grower that I’ve cut back multiple times to give cuttings away and to propagate new plants, so this plant would be huge if left untamed.

I can’t believe its already been nearly 2 years since I brought it home!

Photos of all mentioned plants for comparison

Because this plant has two variegation mutations, it is easy to propagate through tissue culture. It is more difficult to lose both mutations in propagation than it is for plants that have only one mutation (like the other variegated Monsteras). Additionally, people haven’t cited (to my knowledge) any examples of M. deliciosa ‘Thai constellations’ that reverted to fully green leaves for the same reason.

Despite this, the science of variegation does show that it is possible for the plant to eventually lose both mutations. It is just a lot less likely. So if you want a plant that is highly likely to retain its variegation, this gorgeous plant might be the one for you!

The potential of tissue culture is greater accessibility to plants that are currently rare or expensive – which I love!

Tissue culture has allowed plants that were once rare or very slow to propagate to be produced much more quickly and consistently. Hobbyists, sellers, and growers are talking about many highly desirable plants being available within the next couple of years at a much lower cost through tissue culture, like the Philodendron ‘Pink Princess’, Monstera obliqua, other variegated Monsteras, and many more.

It is hard to deny the amazing potential of tissue culture within the houseplant industry both for buyers and sellers.

I look forward to the day that some of these expensive and beautiful plants become available to a wider audience. 🙂

I recently became aware of a company called Bloomify that sells adorable, small plants in tissue culture so that you can enjoy a plant in a closed setting for extended periods of time without having to do anything to keep them happy.

I ordered the open pot design below with a small orchid and it looks exactly like the advertising photo. I’m excited to see how it does over time and report back.

I’ve included links to Amazon (through Amazon’s affiliate program) for 2 of the plants they offer, but there are many more as well. 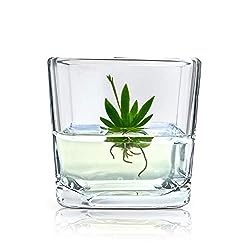 Because the orchid is rooted in our special gel medium, you can watch it grow with a peace of mind even if you have the brownest of thumbs.

This product is unique in our product line because it is both MAINTENANCE FREE AND OPEN POT in design.

The nutrition in the gel eliminates the need for watering, fertilizing, and direct sunlight. Just place the orchid in bright ambient lit area and avoid sunlight or direct light.

At any point, you can also transplant your orchid bonsai plant into a pot following regular orchid care. 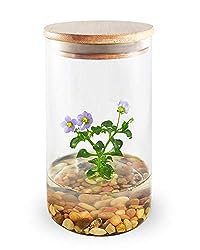 The Terra Gel is developed with safe organic compounds, water, and all essential materials to sustain the Persian Violet inside the terrarium.

The gel is free from microbes and contains necessary nourishment, including glucose, a plant energy source naturally produced through photosynthesis.

This Persian Violet is encased in a modern, high-quality glass jar with an air-tight cover to ensure no room for mold growth, bugs, and spills.”

Thank you so much to all of the hobbyists who contributed their thoughts, pictures, and time to help me create this post. I really appreciate you all. There wasn’t a single person that didn’t want to help when I asked. That is pretty special. Thanks again!

Note: I always want to get as many details right as I can. If you see something that isn’t quite right, please reach out and let me know!