How to Care for the Vanilla Bean Orchid The plant responsible for the vanilla beans used to flavor many desserts and sweets is an orchid, known scientifically as Vanilla planifolia.

This orchid is primarily grown for commercial vanilla bean production, but it can also be grown as a beautiful and novel houseplant.

Today’s post will cover how to care for Vanilla planifolia and how the highly sought-after vanilla beans are cultivated.

What is Vanilla planifolia?

Vanilla planifolia is an orchid whose fruit is used to make the popular vanilla flavoring we use is sweets and treats, as well as in cooking savory dishes.

Vanilla planifolia has glossy, green, flat, succulent leaves that vine and trail. This is a unique growth habit compared to other common orchid houseplants, which are epiphytic (growing on trees) but not vining.

The name, Vanilla planifolia, means small pod (Vanilla) and flat leaves (planifolia). It is commonly referred to as the Vanilla orchid, the Vanilla Bean orchid, and the Flat-leaved Orchid.

The variegated plants grow much slower than the all-green plants, making them less desirable for commercial vanilla bean production. However, they are beautiful additions as a houseplant.

While Vanilla planifolia does have specific needs to successfully grow in a home, it is a fairly easy houseplant once you know what its requirements are.

How Vanilla planifolia Grows in Nature

Vanilla planifolia is considered a semi-epiphyte, which means that it grows both as a terrestrial orchid rooted in the ground and as a climbing plant growing up to the treetops and then spreading amongst the branches.

While in the wild it can reach lengths of 100 feet or more to reach the treetops, it rarely surpasses 15 feet as a houseplant.

It is native to Mexico and was known to the locals for thousands of years before a Spanish explorer happened upon it in 1520. The orchid was brought back to Spain, but no one could figure out how to get the orchid to produce its signature beans.

It took 300 years for someone to discover that the flowers were pollinated by a bee native only to Mexico, which meant that hand pollination would be required to grow it elsewhere. Even in its native growing terrain, Vanilla is often hand-pollinated because the native pollinators aren’t as efficient.

How Much Light Does a Vanilla planifolia Need?

To learn more about what bright, indirect light is, click here to read my post demystifying this term.

How to Water Your Vanilla planifolia

To maintain moisture, water the plant when the first 2 inches of potting medium are dry.

I prefer to use a moisture meter because it gives me a clear answer about the moisture level of a plant’s potting mix.

Here is an affiliate link to the moisture meter I use from Amazon:

What Potting Medium Does a Vanilla planifolia Prefer?

Vanilla orchids grow on the forest floor, which has loose, compost-like soils.

To replicate this in my home, I use a chunky mix nearly identical to what I use with aroids and hoyas.

How to Fertilize Your Vanilla planifolia 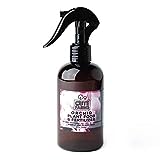 How to Propagate a Vanilla planifolia

Vanilla planifolia can be propagated from a cutting.

Growers recommend taking cuttings that include at least a few nodes (places where leaves and roots grow) as longer cuttings increase the success rate and length of time needed for rooting.

After taking a cutting, allow it to dry for a day or two before planting it.

Once dried, the cutting can be planted on a well-draining potting medium (like that used for other orchids) and staked for support. At least one node should be touching or just below the soil surface to encourage root growth. The node(s) at or below the soil surface should have the leaves removed to help prevent rot.

During the rooting process, the cutting can be watered when the pot has completely dried.

To check for roots if the node is below the soil surface, lightly tug on the cutting. If roots are forming, you will feel resistance when you pull.

Once there are roots, vanilla orchids like to stay evenly moist (as described above in the section on watering)

What Pests or Diseases are Vanilla planifolia Vulnerable to?

Vanilla planifolia is very prone to root and stem rot.

Both root and stem rot are typically the result of overwatering, lack of light, or poorly draining soil.

While Vanilla planifolia does like to remain moist most of the time, waterlogged conditions are very problematic.

Vanilla can suffer from many common houseplant pests, like aphids, mealybugs, and spider mites, but it isn’t particularly susceptible to them.

It is much more likely that Vanilla will contract a fungal disease or suffer from over or under watering.

What does Vanilla planifolia require to produce blooms?

The buds are typically produced in clusters and will bloom sequentially over several days.

Each flower only lasts for a day and must be pollinated shortly after opening as the flower is only viable for a few hours.

How Do You Pollinate Your Vanilla planifolia to Grow Vanilla Beans?

To see how manual pollination can be done with a toothpick, watch the video below. It’s not difficult once you know what to look for.

How Vanilla Beans are Processed for Use in the Culinary World

From the time of pollination, vanilla beans take about 9 months to mature.

You will know the bean is mature when the bean begins to yellow on the end connected to the vine.

Once a bean is harvested, it goes through an extensive process to produce the vanilla bean used for baking. This process can take up to 9 months.

At this point the bean is ready to use in baking, cooking, or to make extract.

Additional information: There are 2 other species of orchids that are also used to produce commercial vanilla beans: Vanilla tahitiensis and Vanilla pompona. These orchids are not as widely grown for commercial production or as a houseplant.